He will be awarded a watch for this, his first career weekly award.

Pablo is training in AZ with a group called Triple Threat Performance. Check them out on Facebook, with posts like these:

The
Panda is committed. After losing 14 lbs in his first two weeks at TTP,
Pablo is coming in early on a saturday morning to get it in.

“The Panda is Hungry”

There’s been a lot of talk about Pablo’s weight, about his eating habits, about his training and commitment. There’s the World Series breakfast story from Buster Olney. Jeff Fletcher had a story at AOL’s Fanhouse. Bruce Jenkins had a great story at the SFChron. There was even a sad photo at Deadspin and another here.

But Henry Schulman at the Chron had it best: “The Giants plan to use a carrot-and-stick approach with Pablo Sandoval’s conditioning this winter. If he does not eat enough carrots, they might stick him in Fresno to start the 2011 season.”

“I
think we learned a lesson as an organization that we probably put him
too far out there,” Sabean said. “In some ways, it worked against him
having to live up to that hype. We’re not going to make that same mistake with (Buster) Posey. We’re
going to try to let these guys fly under the radar because we know that
the second time around they’re marked men, and in Pablo’s case he’s got
a lot of work to do.”

The bottom line is that the guy can hit. He has hit and he will hit, but I don’t know for how long or for what team. It’d be a shame if the Giants give up on him, bench him, demote him to the minors, give him away to another club.

He isn’t playing winter ball. He isn’t going home to Venezuela, easier since his Mom’s here. He is going to put in the work. He may bounce back and have a great 2011.

In the end though, you can see how this game turns out. It wouldn’t surprise me if he ended up a very successful DH.

On the lighter side, Here’s our Panda having fun:

After a foul call took away extra bases, the Panda took a
deep breath and came through with a huge hit in the NLCS Game 4, turning a
one-run deficit into a one-run lead. Sure, the Phils tied it up later, and
Pablo hit into (yet another) double play, but that moment was sweet. The Panda
screamed, clapped, pumped up the crowd and the whole team.

“When I came back, Bochy was talking to the umpire … I
just calmed myself down. Count to 10. Breathe. Get a pitch you can hit a
flyball or to the middle. Don’t try to do too much.”

“This game is emotional,” Sandoval said.
“You have to calm yourself down a bit sometimes.”

“I just tried to get a pitch to hit the ball in the air, to tie the
game,” Sandoval said. “He made a mistake.”

What could make the Giants’ wonderful playoff run even better? A contribution from Kung Fu Panda.

“No, I’m happy
… You have good moments and bad moments. You have to learn. You have to keep
your head up. I’m happy when the team wins. That’s just the way I am.” 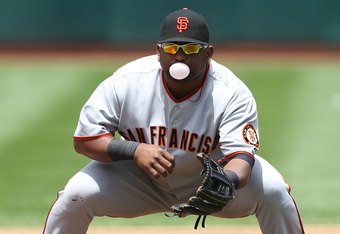 We’re still with you!

The Giants didn’t need
unexpected power from the bottom of their lineup. They just needed their
best hitter to come through. Unfortunately for them, their Panda seems
to have forgotten his Kung Fu grip.

Sandoval is getting tied in
knots by inside fastballs and is in perhaps the deepest slump of his
young career. For the season, Sandoval is 0-for-13 when batting with two
outs and a runner in scoring position. For the month, he’s hitting .071
(2 for 28).

Sandoval struck out on three consecutive pitches —
all swing-and-miss inside fastballs from Mike Pelfrey — to strand Aaron
Rowand at third base in the fifth.

Sandoval came to the plate in
the ninth with the tiebreaking run at second base but fouled out when Davis
flipped over the dugout rail while making a spectacular catch.

“He’s
pressing. He’s really fighting it,” Giants manager Bruce Bochy said.
“You know, he’s our guy. He helps make it go. We’re trying to get it
done until he gets going again. Pablo is going to have his little
streaks, too.

23, was found to have a slight astigmatism in an offseason eye exam; he
has alternated between sports glasses, contact lenses and nothing at
all. The tinkering is part of the natural compulsion that all slumping
hitters feel, Bochy said.

Sandoval insisted he is seeing the ball
fine. He had a lengthy pregame session with hitting coach Hensley
Meulens and said he’d look at video to break down each of his at-bats
Friday.

His swing might not be the same. But his high-energy
spirit seems to be.

“Nah, I’m fine,” he said. “It’s part of the
game. I feel great, and I’ve been working hard. “… Everybody passes
through these moments. To get out (of them), you have to be 100 percent
positive.”

Pitchers beware. It turns out Pablo has been tearing up the NL with one bad eye. That explains why he hit only .330 last season. He wore corrective goggles in Venezuela this winter. Now that he’s seeing 20-20, who knows how much better he’ll be?

“I can see the ball better. It’s clearer,” the Panda said.

He began wearing sports
goggles in the Venezuelan winter league and prefers hitting with them
instead of contact lenses, which dry out his eyes.

Asked if he thinks the improved eyesight will boost his numbers, Sandoval said, “We’ll see when the season starts.”

There was another revelation about the Panda on Friday. Player bios
given to reporters list his weight at 262, or 16 pounds more than his
official 2009 weight of 246.

Head trainer Dave Groeschner said Sandoval weighed
262 on the first day of spring training last week. If so, he is roughly
15 pounds lighter than what he was believed to weigh at the end of last
season and 12 pounds heavier than the goal of 250 the medical staff
reportedly set when it put Sandoval on a rigid winter diet and exercise
program.

As for that 246 number in last year’s media guide, well, maybe the
Giants fudged that one a little bit. He clearly weighed more than that
last spring.

Here’s the latest on Pablo at home in the Venezuelan Winter League. He got a late start after spending the start of the season in personal training in the US. But, no surprise, he’s right on target with a .924 OPS

If you missed it, here are a couple of photos of the Panda from November: 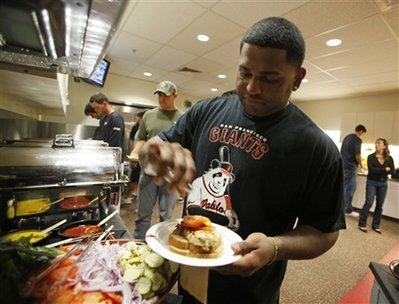 In
this photo taken Thursday Nov. 19, 2009, San Francisco Giants third
baseman Pablo Sandoval carefully selects items for lunch following a
workout at AT&T Park in San Francisco. The ‘Operation Panda’
shape-up program is full steam ahead for San Francisco’s free-swinging
slugger, who used to fuel up on pizza and his McDonald’s favorites of
Big Macs, fries and milkshakes.(AP Photo/Eric Risberg) 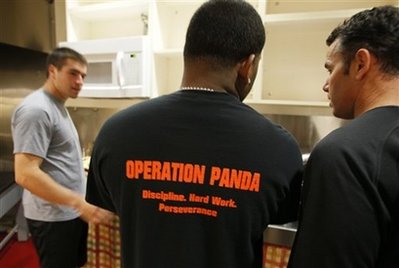 In
this photo taken Thursday Nov. 19, 2009, San Francisco Giants third
baseman Pablo Sandoval, center, gets instruction from strength and
conditioning coordinator Ben Potenziano, right, about what to eat for
lunch following a morning workout at AT&T Park in San Francisco.
The ‘Operation Panda’ shape-up program is full steam ahead for San
Francisco’s free-swinging slugger, who used to fuel up on pizza and his
McDonald’s favorites of Big Macs, fries and milkshakes.(AP Photo/Eric Risberg)

“I’m a Latin American dude. I eat rice and beans, and I eat a lot.”

“This is one of those things you wake up, you
want to work out, you want to do your thing and get ready for next
season,” Sandoval said. “You want to learn things for your life, for
your career.

“I do this for the fans, for the team but
especially for my career. I don’t want to have only a five-year career.
I want to have a longer career. That’s what I’m thinking about right
now. Now I feel great. I’m going to do it, do it, do it.”

The other news is that the Giants’ GM named Pablito as next year’s clean up hitter. “We’re operating under the presumption Pablo’s the fourth hitter,”
Sabean said. “In a perfect world, you’re hoping to find more of a sure
thing as a third hitter or fifth hitter than somebody hitting the ball
out of the ballpark.”

He doesn’t make any sense. Sandoval proved to be the best thing the Giants have had for the last few years. He’d be the best choice at the 2nd through 5th spot in the order. Wake me up when they get someone more “sure” to hit third.